Collaboration dynamics are classically appraised as processes only based on dyadic behaviours between authors. Yet cognitive 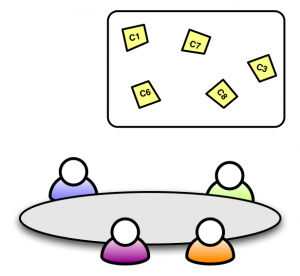 content and expertise of individuals also matter to build new collaborations. We also consider that joining a team essentially stems from collective decision which cannot rely only on individual-based characteristics: team-level characteristics also matter. We then propose to define teams as joint grouping of agents and concepts. We empirically compute the likeliness to form a team given social, semantic and socio-semantic characteristics measured at the meso-level of teams.

Abstract: This paper quantitatively explores the social and socio-semantic patterns of constitution of academic collaboration teams. To this end, we broadly underline two critical features of social networks of knowledge-based collaboration: first, they essentially consist of group-level interactions which call for team-centered approaches. Formally, this induces the use of hypergraphs and n-adic interactions, rather than traditional dyadic frameworks of interaction such as graphs, binding only pairs of agents. Second, we advocate the joint consideration of structural and semantic features, as collaborations are allegedly constrained by both of them. Considering these provisions, we propose a framework which principally enables us to empirically test a series of hypotheses related to academic team formation patterns. In particular, we exhibit and characterize the influence of an implicit group structure driving recurrent team formation processes. On the whole, innovative production does not appear to be correlated with more original teams, while a polarization appears between groups composed of experts only or non-experts only, altogether corresponding to collectives with a high rate of repeated interactions.