We have defined a set of methods to 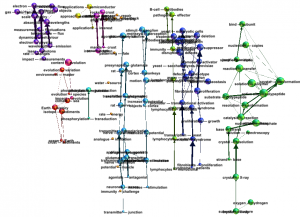 build Science maps. These  maps are defined as networks made of  more or less related scientific fields (associations of semantically close concepts). These thematic fields can be construed as sets of phrases widely used by scientists to deﬁne their research, a journal topics or a conference scope.

Yet this meso-level reconstruction does not help understanding the dynamical feature of the field under study. Two maps at two different time steps can hardly be compared as their inner constituent naturally change with time. If one considers an actual scientific community, its frontiers may evolve through time : a thematic field composition may grow by new concepts incorporation, or decrease through concepts loss. Two thematic fields can also merge into a new one, or split if two sub-fields are taking their independence. 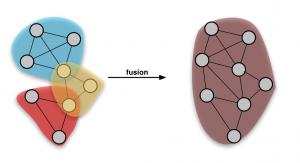 which can easily be done once defined a metric between fields pertaining to their two periods. This operation allow to build a phylogenetic network which feature meso-level events: such as death of fields, emergence of new fields, growth or decrease of a field, split or merge of two fields (cf. figure).

The topology of the filiations between fields offer new perspectives to decipher science dynamics and represent them. For example in the first figure we have represented the evolution of thematic fields detected from the set of publications published in Nature since 1975. We have colored fields according to the branch of the phylogenetic network they belong to.