What makes a good information spreader ?

Tracking URLs and their diffusion through 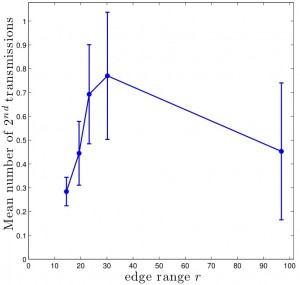 citation paths, one can describe information cascades in a blog network. Given these data it is possible to find correlation between the capacity of a blogger to spread new information and her/his position in the social network. We show that centrality of degree is not the only parameter that accounts for high spreading capacity. Blogs which link  distant groups are also empirically more likely (up to a certain point) to trigger longer cascades.

Abstract: The blogosphere can be construed as a knowledge network made of bloggers who are interacting through a social network to share, exchange or produce information. We claim that the social and semantic dimensions are essentially co-determined and propose to investigate the co-evolutionary dynamics of the blogosphere by examining two intertwined issues: first, how does knowledge distribution drive new interactions and thus influence the social network topology? Second, which role structural network properties play in the information circulation in the system? We adopt an empirical standpoint by analyzing the semantic and social activity of a portion of the US political blogosphere, monitored on a period of four months.