Blog networks are often described as “small world” social networks where individuals would potentially be topologically close to most of the other actors. On the other hand, links would be primarily created towards similar-minded individuals and well-connected bloggers, suggesting a “balkanization” of Web communities.
Local Networks, Local Topics

Examining a portion of the US blogosphere on 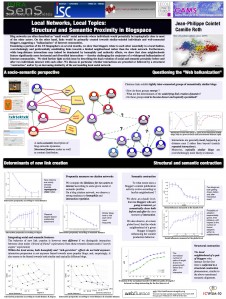 several months, we show that bloggers relate to each other essentially in a local fashion, overwhelmingly and preferentially establishing links towards a limited neighborhood rather than the whole network. Furthermore, while long-distance interactions may indeed be dominated by homophily and authority effects, we show that close neighborhoods feature signiﬁcantly more horizontal and diversiﬁed interactions — thereby challenging the conjecture of a widespread balkanization of Internet communities. We shed further light on this issue by describing the dual evolution of social and semantic proximity before and after two individuals interact with each other. We discuss in particular whether interactions are preceded or followed by a structural “contraction” and/or by an increasing similarity of the surrounding local social network.