Given  semantic reconstructions of  scientific 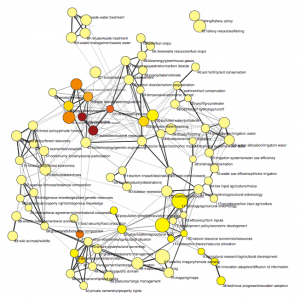 activity one can be tempted to “project” agents publications or even agents dynamics on conceptual maps.

A proximity measure between groups of terms provides a simple way to represent any institution (an agent, a lab, or a whole research department) production as a density of probability of presence onto thematic fields. In the illustration, the publications of a scholar in rural economy are projected on a map of sustainable development researchs.

Plotting an agent dynamics is a bit more tricky as the semantic landscape onto which he is projected evolves with time. 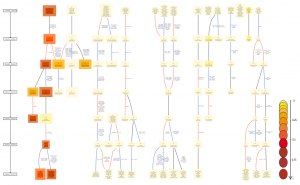 Each scholar has its own trajectory into a moving space. And this space is evolving because of the actors topics change. Yet the thematic fields which emerge appear to constrain deeply agents activity. Semantic structure seems to be both emerging from individual activities and confining agents. On the illustation above, publication dynamics of a reseacher has been represented as an evolving distribution of degree of involvment in moving thematic fields articulated in a phylogenetic network. This researcher is conitnuously involved in the same branch of the phylogneny (even if he may have deeply modified its vocabulary) and one can check that there is a very strong for any agent to “get stuck“ on the same field.